In 2018, DeliverFund was able to track down victims of a notorious human trafficker.

DeliverFund was asked by a law enforcement agency to advise them in real time as they worked to locate a human trafficker, rescue his victims, and bring him to justice.

Thanks to DeliverFund’s state-of-the-art technologies and specially trained intelligence analysts, we were able to help law enforcement rescue a victim who was facing a horrifying situation. Jane held the key to finding the current location of the trafficker, but she was having a hard time trusting the officers. Our team continued to assist the officers as they gently pried the information from this distraught young woman.

All traffickers are barbaric, but this particular trafficker was beyond that.

He had taken Jane’s four-month-old baby and used the threat of abandoning the child in the street to control her.

Under this threat, this young woman was forced to sell her body and give the money to her trafficker. With the help of the DeliverFund team, the officers were able to earn the young victim’s trust and get the information they needed to locate and arrest the trafficker and reunite Jane with her baby.

The life of a victim

This is not a movie. This is real life. 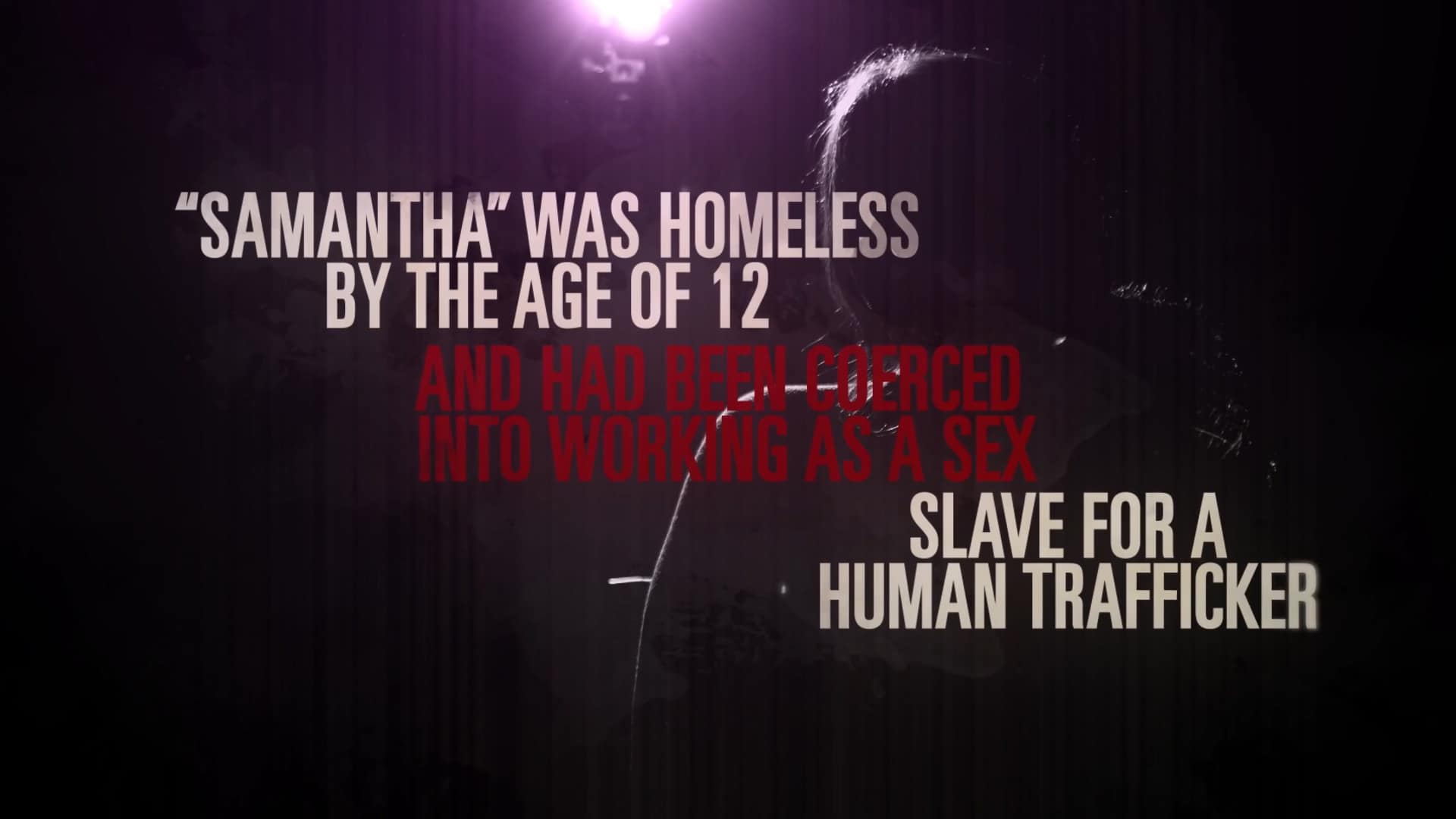 DeliverFund assisted law enforcement in finding Samantha’s* trafficker and putting him behind bars.

Samatha was homeless by the age of 12 and had been coerced into working as a sex slave for a human trafficker. In this video, Samantha talks about what she was forced to endure as a former victim.

DeliverFund assisted law enforcement in finding Samantha’s* trafficker and putting him behind bars.

Samatha was homeless by the age of 12 and had been coerced into working as a sex slave for a human trafficker. In this video, Samantha talks about what she was forced to endure as a former victim.

Samantha was only allowed 4 hours of sleep a night, and her trafficker made her addicted to heroin.

“When I first started working, I would have breakdowns in the middle of a session. I couldn’t do it. Until finally, I kind of just separated me and who I am when I’m working. Otherwise, I would go crazy. I would lose it. You numb your mind.”

“I remember one time, I was just outside smoking a cigarette and someone asked me for a lighter, and he had somebody watching me. I got beat for that later, and it was just because someone asked me to use my lighter. Because I wasn’t allowed to talk to anybody. When we went out, I had to tell him my order to tell the waiter. I couldn’t look at anybody. I had to look at him or the ground. And if you messed up in public, then you were going to get beat as soon as you got back to the room. And he’d make sure nobody heard. He’d turn up the TV and turn on the shower. And if you cried or screamed or anything, then he would take you out of the room, and you never knew if dead was going to be an option. You never knew.”

Trauma doesn't have to be the end of their story

These real stories of modern slavery don’t have to end in tragedy. Every contact made with a victim is an opportunity to take them out of the cycle of exploitation, and DeliverFund’s work with our law enforcement partners help increase the chance of a victim’s cooperation.

Samantha’s human trafficking story is over, but her story as a survivor and thriver is being written right now.

Your donation can make a difference to girls like Jane and Samantha. Help them tell a different story.

Sarah was an ordinary American girl.

One summer night, Sarah left her job at a local fast-food restaurant with someone she thought was a friend, a woman her boyfriend had introduced her to a few weeks before. Sarah’s boyfriend seemed to have money, but no job. No matter. He treated her better than any other boyfriend she’d had before. She fell for him quickly.

What Sarah didn’t know was that her boyfriend worked for a human trafficker, spotting girls he could manipulate quickly and bring to the trafficker. He had already sold Sarah to him. When Sarah got in the car with the new friend, she didn’t realize that she was crossing the threshold into slavery … participating in her own abduction. Sarah was taken to the trafficker’s house, where she was repeatedly raped and beaten in a process that human traffickers call “seasoning”. Sarah was then force-fed narcotics in quantities that ensured a fast addiction. She was kept in a dog crate when she was not being sold for sex over the Internet. Sarah was living one of the most brutal lives imaginable, and law enforcement had no idea she was missing or that her trafficker even existed.

After a little more than a month, Sarah managed to escape, and ran to the police. She told them her story and they called DeliverFund for help. Within hours, we located her trafficker, along with the other women he was holding. Days later, the local SWAT team raided his house, freeing all the girls he had enslaved and bringing the trafficker to justice.